This particular story spans 25 years and counting. Woven through this story is extraordinary care provided by STVCC from both its adoption and counseling departments.  This story also features friendships which have grown way beyond neighbors borrowing a cup of sugar or sharing tools. Some say that this friendship is an accident of geography, others will say it is far more intentional. It is about being there for each other through good times and bad times.

At the center of this story are Shanna and Jim Davis, both educators who value family.  After three natural births they still wanted another child but Shanna’s body would not sustain another natural birth so they set out to adopt. As a Catholic bi-racial couple they felt comfortable turning to St. Vincent Catholic Charities for support in finding a bi-racial child, preferably an infant, to adopt.

After more than a year of trying to adopt, Shanna and Jim received word that a baby girl was due to be born around Christmas. Happily, the birth mother had said ‘yes’ to Shanna and Jim’s profile. 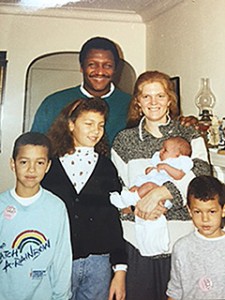 “We were excited about the prospects of a new baby. But it all happened when we had the responsibility of helping Jim’s father through a health crisis,” shared Shanna. “Both Jim and I had recently lost our mothers and we had the sense that we had two angels in heaven watching over us.  We just knew that this baby girl would be ours in due time and that we would be able to help Jim’s dad get stabilized.  Our baby was born on Christmas Day and came home to us on January 17. The nurses in the hospital did not know the baby’s name so they just called her Angel. That nickname stuck and to this day we still give Sydney little angel gifts.”

However, fifteen years later that joy would be in contrast to new challenges. The Davis family learned that Sydney, at 15 years old, was pregnant. This knowledge strengthened the bonds between family and friends. The Davis’ closest friends became their confidantes, their support team.  At that young age it was clear that Sydney and the boy that she was involved with were not equipped to be parents. Yet even in that clarity, there was all the support Sydney would need in making the decision to give her child up for adoption.  In their time of need the family turned to the counseling department at STVCC. They had many appointments for Sydney alone, Shanna and Jim alone, and family group counseling for the three of them.

Providing additional support was family friend and Sydney’s godmother, Vicki R., who as a nurse made the offer to be Sydney’s birth coach. “Vicki said to me, you be the mom to your daughter when she needs you most and I’ll be the coach, “shared Shanna. “With Vicki’s help, Sydney stayed healthy during her pregnancy.  Together they attended childbirth classes, wrote a birth plan, and crafted the questions that Sydney would ask of the prospective adoptive parents.”

An adoption caseworker at STVCC honored Sydney’s request that the adoptive parents be black or bi-racial. She considered several possible adoptive couples. For Sydney it became a clear choice to select Nikki and Rob, a mature couple with no other children. “Nikki and Rob seemed to answer all of Sydney’s questions in just the right way, and there was a real connection and rapport established at that meeting,” commented Shanna.  With the help of the adoption caseworker, Sydney’s arranged an open adoption. Additionally, all parties agreed upon a generous plan of communication and visits. Even so, at the eleventh hour, Sydney was doubting her ultimate decision. Only the consistent, encouraging support of family allowed her to be both faithful and confident. Their support affirmed that she was doing the right thing for her baby, as well as herself.  She had her baby boy and his new parents named him Marcus.

After the first three years, the agreed upon visitation plan was due to be renegotiated.  The whole family was thrilled when Nikki and Rob approached Shanna and Jim, requesting that they be Marcus’ extended grandparents. They also asked to have consistent communication with Sydney and her family, along with Marcus’ aunt and uncles.  You see, they had come to trust the whole Davis family and their friends, and knew that this choice would be a good thing for Marcus. He would have the benefit, love and support of this much larger extended family.  This incredibly courageous act of faith on the part of the adoptive parents has created blessings, which continue to multiply for everyone.  The circle of friends around the Davis’ has certainly grown by intention.

Sydney is now 24 years old, married and has two children with her husband. She has studied to be a medical assistant and is awaiting certification. She and her husband live in Las Vegas. Marcus is 8 years old and has been enjoying his summer break, which has included vacation time and a birthday party. Marcus’ mother Nikki will often call Vicki R. for advice on health matters. Shanna has recently joined her husband Jim in retirement and they look forward to more time with all of their grandchildren, family and friends.