Lansing Refugee Story: “This is Home” 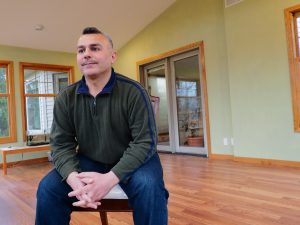 His family walked in and out of their living room, taking turns telling stories and listening to each other’s. The home has been theirs for less than a year — bought about seven years after arriving in Lansing as refugees.

Inside, the youngest helped herself to ice cream at the kitchen table. Outside, a red, white, and blue pinwheel spun in the landscaping. This is home, he said.

Sixteen-year-old Hawraa’s consumed with schoolwork and volunteers at a local hospital. Ahmed, 9, is into soccer (“and recess,” he said). Nadaa, 8, likes reading, dancing, and running. His second daughter, Noor, 15, was at driver’s education class.

Al Saedi said he’s proud to watch his kids pursue their own ambitions — he’d hoped the children would have educational opportunities in America. But, he said, he wants them to remember how they got here.

“Sometimes when we sit down, especially on the weekends, something grows in my mind and I start a story and tell them what was going on (in Iraq). The youngest just open their eyes like ‘wow.’ They’re not fully aware what was going on.”

Now, he’s committed to sharing his story with others in the hopes he can add nuance and color to the politically polarizing issue of refugee resettlement.

Al Saedi is a case manager at St. Vincent Catholic Charities’ Refugee Services, the same agency that resettled the family in 2010. He understands the plight of refugees. At work, he helps new arrivals find jobs, file paperwork, and keep important appointments.

His own story begins in Baghdad.

“Baghdad,” he said, smiling. “It’s a very beautiful place. I grew up there. I had many friends in high schools and college, I met my wife there.” 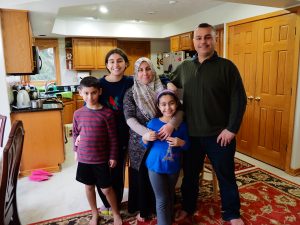 His oldest daughter Hawraa remembers “everything” about Iraq.

“My entire childhood. It’s where I was born and where I was raised,” she said, recalling the big house her family shared with her grandparents. Her mom would braid her hair and tie ribbons in it, she said. Neighborhood girls would meet her to walk to school. She remembers the University of Baghdad, where her mom worked and sometimes brought her along.

“We had big opportunities there, especially before the war. But since then everything’s changed,” Nael Al Saedi said. He worked with the U.S. Army as an interpreter, then for a U.S. security company.

The jobs put him in a dangerous position. “I’d been threatened before,” he said, but he and his wife May Babahami didn’t consider fleeing Iraq until a bomb went off outside their home. After that, “it didn’t take a split-second to decide should I stay or should I leave.”

At the time, the children were about 7, 6, and 18 months. “They remember, especially the older two (children),” he said. “They remember the war … They remember explosions, fears from people around them; neighbors yelling. It is very traumatic.”

Hawraa Al Saedi knows her childhood wasn’t idyllic. “I was born and there was war. It’s all I’ve ever known. There were always bombs and missiles,” she said. An airstrike once sent the family downstairs for shelter, where her grandfather wrapped the kids in blankets to protect them from glass shards. Her dad was hit.

Scars on her own forehead remind her of falling on shrapnel in the Iraqi countryside, where the family fled when Baghdad fell in 2003. On another occasion, her grandmother and cousins were near a car bomb when it exploded. They survived, but the experience of seeing her grandmother injured etched into Hawraa’s memory.

Logistically, leaving Iraq was difficult, Nael Al Saedi said. Gathering passports and asking for advice from others already in Syria were the first steps. He hid in Iraq for a while and for more than two years in a Syrian apartment. The couple’s youngest, Nada, was born there.

The Syrian people were welcoming, but the government didn’t want Iraqis to establish lives there; the only work refugees could find paid in cash under the table. Finally, about three years after applying for refugee status, a woman working in the U.S. Embassy fast-tracked his application.* Nine months later, the family arrived in Lansing.

They arrived on St. Patrick’s Day 2010. (The sight of green-clad party-goers in East Lansing confused the family the afternoon they landed. His brother, who arrived nine months before, couldn’t explain it either. “He said, ‘I’m not sure, but for sure it’s a festival. Don’t ask me,’” Nael laughed.) 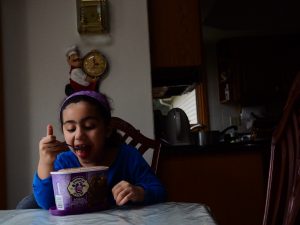 “America offers everything. First thing, our house. We worked hard to get this house. Kids in the schools,” he continued. “This is my home and we have our hearts (here) and fulfill our commitments to our children and our community. We’re working, paying taxes.”

Now he gets to work with other refugees through STVCC, helping them navigate and understand the America he now calls home.

St. Vincent’s has already experienced serious consequences from the presidential executive order that banned refugees from entering the U.S., said Judi Harris, director of STVCC Refugee Services. Funding for resettlement and employment programs are tied to how many refugees arrive in Lansing. With the legality of the executive order in question, Lansing refugee arrivals have significantly decreased. Because very few people are coming in, funding for employment and health services programs for the 1,000 Lansing refugee clients St. Vincent’s already serves has been significantly reduced. Staff have also been laid off.

“The future of refugee resettlement is very precarious,” Harris said.

It’s in this climate that Al Saedi hopes his story can make a difference.

His wife, May Babahami, has a full-time job now. His parents are in the area and he has brothers in Haslett, Owosso, and Windsor, Canada. Hawraa is considering becoming a doctor and is looking into the University of Michigan (though her mother would prefer the closer Michigan State University).

“Maybe (the family’s story) is going to be the best example,” he said.

The article was written by Erin F. Wasinger, a freelance writer in Lansing and volunteer at St. Vincent Catholic Charities.

*The Special Immigrant Visa program, which grants people who work with U.S. companies entry to the U.S., wasn’t in place when Al Saedi’s family were refugees.