A new beginning often comes in unknown ways, as Phozia a refuge from Africa would attest.

This past June, to conclude World Refugee Awareness Week, we unveiled a Peace Pole at Lansing City Hall. Representatives from city government and St. Vincent Catholic Charities (STVCC) stood at the podium. Joining them in sharing the importance of fostering a welcoming community for refugees was a woman named Phozia. A refugee herself, her personal story of struggle and resiliency provides a poignant example of the power of a warm welcome in a refugee’s life.

As part of a persecuted minority group in Africa, Phozia faced rejection from her family and community. She lived as a refugee in Uganda for 21 years before she came to Lansing through STVCC. 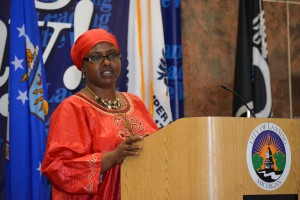 “We were stateless, and had no place to call home,” she recalled during her speech to community members and city officials.

As a child, Phozia received her education at a boarding school in Kenya. And there she learned to speak Somali, Swahili, Kiganda, Kinyarwanda and English.

“I began to ask myself, if I have an education, why not do something with it?” she said.

She began working as an interpreter for the United Nations, and eventually became a case manager for asylum-seekers. “I met many people in the refugee camp.  They were helpless and had been beaten and persecuted by warlords and militia groups,” she said.

Phozia did never dreamed of letting her children face the same exclusion she endured. In 2013, the United Nations helped her family relocate to Lansing, through STVCC. “Everyone was so friendly, and so inviting,” Phozia recalled. “They helped me find a job and safe housing. They are like my second family.”

Today, Phozia helps incoming refugees adjust to their new lives. During her speech, she reminded the audience to openly welcome refugees. “We are just craving love and want people to open up to us,” she said. “We are only human, just like you.”

“Resettlement is a new beginning,” she continued. “It’s a new life. For me, coming to Lansing helped me realize that this is the life that I’m supposed to lead. Not the one I left behind.”