A Family For Christmas 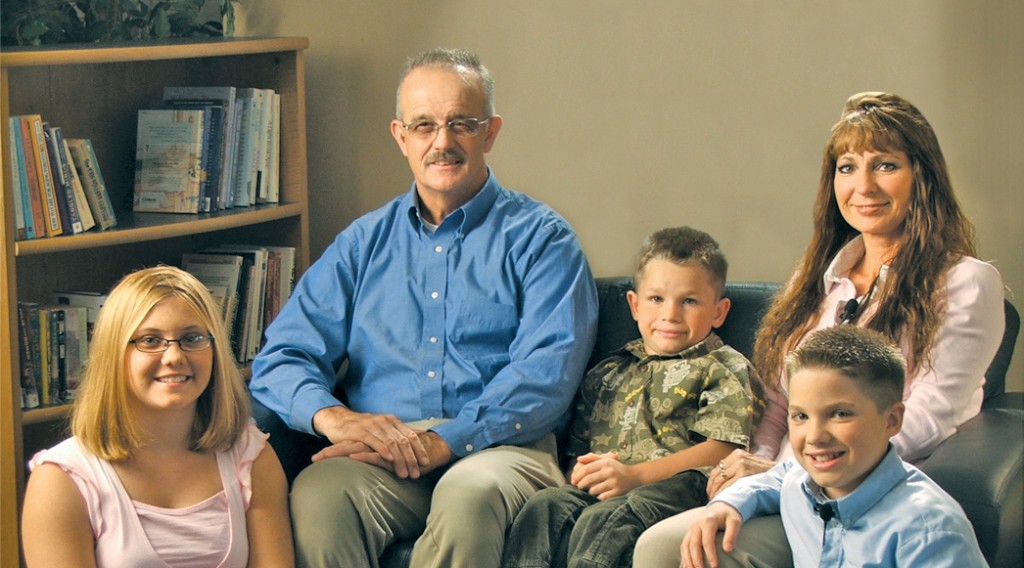 Christmas at the Strachan’s Home is full of life.  Contrasting to the cold outdoors, inside the cozy home one is reminded of laying on a busy beach with closed eyes soaking in the sun on a warm day.  You listen and hear a hum of voices chatting, laughter and an occasional cry from an infant breaks through.  Instead of a beach ball, the occasional rolled up wrapping paper launches through the air.  Amongst the over two dozen active people, there is an unexpected calmness.  A sun like warmth from the home envelops you; you know that here there is love.

To date Karen and Kent Strachan have fostered over thirty one children and adopted eight, in addition to their two birth children.  Many of the other twenty three children may not have been eligible for the Strachan’s to legally adopt, but they are still considered their children and are always welcome home.  Currently the Strachan’s have two new little ones, a two and four year old set of toddler brothers, living in their home as foster children. Their three youngest adopted children also live at home, April, Christian and Gage, ages 16, 12 and 9.

Young Christian and his even younger brother Gage had experienced a lifetime of abuse and heartache in their home.  After a murder occurred in the very house where they lived, the courts removed them from their parents’ custody.  The boys were only eight and five years old at the time.  Full of confusion, sadness and anger the two children expressed their feelings and their lack of trust in adults through loud and, what seemed like, unmanageable behavior.  Foster homes often felt they could not handle the pair and asked them to be taken to another home.  Christian, now eleven years old, recalls that whenever they saw their caseworker coming he wondered if they were being moved again.

Years past, Karen Strachan had a dream, “I saw a home, the one we eventually moved into, with kids sitting around the table….six years later we became a foster home,” said Karen.  The Strachans felt a calling to become a home for children in need.  When they made the choice to become a foster home they called six different foster care agencies.  St. Vincent Catholic Charities (STVCC) returned their call.  At the time the Strachans had two biological children ages seven and twelve and were looking to help foster children that were younger in age.  The Strachans went through a home study and four months later STVCC called with a request to take in twin sisters, who were fifteen years old.  At first Karen was hesitant; she had not planned on having teenagers in her home.  She asked to have time to think about it.  She called Kent and explained the situation.  The two of them prayed, looking for guidance, and they both felt it was the right thing to do.  The twin teenage girls came into the Strachan family home and never left.  From that point forward it was rare to find a foster child in the Strachan home that wasn’t a teenager.  Only five of the thirty one children who have come to stay with the Strachan’s were not teenagers.

So when Karen received a phone call in 2004 about two young boys, again she hesitated….they were so young.  Of course Karen and Kent said yes.  When Christian and Gage came into the Strachan home they went through a period of adjustment.  At first the children were so traumatized they could not be taken out into public with each other because their behavior was out of control.  Still, the Strachans did not give up and eventually adopted the boys.

Today the boys are a joy to be around and the love in the Strachan family is apparent.  April is also adopted and had faced her own losses in the past.  April, a bright, polite and gentle teenage girl, is now in a good place in her life.  “Now, I have a great family who can take care of me and love me very much.  I have lots of brothers and sisters and I love them all.  I thank God for this family and Mom and Dad,” shared April.

When asked what message they would want to send children who are going through a difficult time and don’t have a “forever family”, April shared, “Hold on.  There is a family waiting for you.”  Young Christian said, “God has a plan for all of you.”  And nine year old Gage reminds us, “There’s Hope.”

Above the Strachan’s fire place in their living room is a large photo with twenty people smiling; most of them are adults.  Very few of their foster children ever went back home.  Most lived with the Strachans til they “aged out.”  However, unlike most foster children who age out of foster care (meaning they turned eighteen and were still never adopted) these children still have a home.  The Strachans continued to be their parents, helping with college applications, wedding plans and advice; whether adopted or not, they are all still family.

Caring for children who are traumatized and have good reason to not trust is difficult work.  The Strachans found that taking their children on missions to the Guatemala orphanage was a beneficial way to not only open the children’s eyes to the needs of others, but a way to give back.  Giving back is an important theme in the Strachan home and this allowed for the youth to understand the world with greater perspective and to understand not only their losses but their blessings.

Karen and Kent feel they have gained as much as they have given.  Karen recalls, “As a young mother I was very career oriented and I found self value in what I accomplished.  The better I was with balancing college, work, kids and volunteer time the better I viewed myself.  I created that atmosphere with my children.  But I learned that you can’t do everything and have a first, because then that is your focus.  So everything is second.  I was telling the children to come with me, rather than putting them in front.  I was passing that on to my children.”

“I learned over time that great performance is not indicative of a great person. The children we cared for were hurt and needed to be loved for who they are.  You measure success by where they came from to where they are now; not in the perfection and number of accomplishments.  If they can have healthy relationships, they have learned to love.  If they feel worth loving then they are successful.  I am free to love them right where they are at.”

“When people get to the end of their life they look back for a feeling of accomplishment.  Monetary gain cannot fulfill you.  I don’t think anything in life can bring such satisfaction as the influence, impact and difference you can make in a child’s life.  Children, whether through birth, temporary care, or those you choose to make you own permanently through adoption, will complete you.”

“I am excited for foster care.  One of the biggest things people should know is your resources; your community services; your rights within the school system, and hooking up with a support system.  I always tell people to use St. Vincent Catholic Charities.  They know the resources.  Connect with other foster parents, it doesn’t mater what agency they use, and I always offer my help.  Also, do not look for immediate rewards.  You are in it for the long hall, not only the temporary.  You see little accomplishments during the teenage years, but once they are in their twenties they start to come back.”

If you would like to contact Kent and Karen Strachan about foster care and adoption advice, they are more than happy to help.  Or if you are interested in contacting them about their work to help support retired missionaries, contact Julie Reynolds, STVCC Community Relations and Marketing Director, (517) 323-4734 ext. 1202 or reynolj@stvcc.org and STVCC will connect you with the Strachans.

If you would like to learn more about adoption, foster care or our children’s home please click on a link below or contact Gina Snoeyink, Director of Counseling and Children Services at (517)323-4734 ext. 1615 or g@stvcc.org.