A Local Soccer Team Inspires All

Maybe the most important work of the Lansing Youth Football Club team isn’t what happens on the field.

Sure, soccer matters to the dozen and a half guys on the team. Almost every day the players carpool to Lansing’s Francis Park for two or three hours of practice. Occasionally they scrimmage teams from Grand Rapids. They train for tournaments in Detroit, Minnesota, and Wisconsin.

“This (team) is our passion,” said one of the team’s captains, Damber Magar. Like most of the players on this independent soccer team, Damber’s family are Bhutanese and came to Lansing as refugees from Nepal. Damber’s family was resettled through St. Vincent Catholic Charities in 2010. 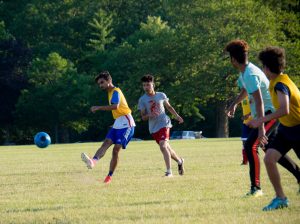 At a recent Thursday night practice, their coach, Bai Lee, was especially working on positions with the boys and young men who’ve been playing the game since they were toddlers. Some of the players are brothers; a few knew each other when they lived in refugee camps, where children would crowd onto fields to play pick-up “football” games. Others practice with the team with little experience but a desire to connect.

“We don’t care if they don’t know how to kick the ball,” laughed Damber. “We will help them. … After a few months, a few years, they start playing well. They can handle themselves when they’re playing with other people. We can see their skills.”

But after practice, he said, “(the captains) try to tell them not about soccer, but about life.”

And it’s this: this intentional mentoring of college-aged players to their middle- and high-school teammates, that sets apart this two-year-old Bhutanese team from other soccer teams.

“We advise them,” Damber said, on everything about school, time management, and their options for after graduation. His friend and fellow 2013 Sexton High School graduate said they’re inspired to do this because of their own experience. 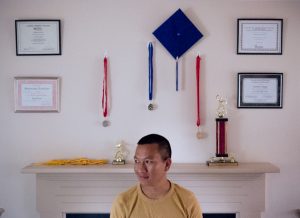 Damber Magar stands in his room surrounded by his sports trophies and academic certificates and diplomas at his home June 20, 2017 in Lansing.

“We try to prepare (them) for college,” said Khada Chapagai. They “feel good” passing on what they found out the hard way. Khada has a graphic arts degree from Lansing Community College. Damber is almost finished with a pre-nursing program there and is considering transferring to Grand Valley State University. Getting to this point wasn’t easy.

“There is no guide person,” Damber said. “We didn’t (understand) this stuff at that time. We didn’t know.”

“We had the opportunity (for college) but we didn’t know it (in high school),” Khada said. So, if a teammate wants to visit or enroll in college, Khada or Damber take them. Damber or Khada help again when the time comes to fill out the FAFSA (the Free Application for Federal Student Aid, a lengthy form that college students submit each year to determine if they qualify for financial aid).

As their teammates began a casual scrimmage one June evening, 2017 Everett High School graduates Mahendra Bhandari and Parang Khamal stood apart from practice to talk about the team. The friends met at school seven years ago, shortly after resettling in Lansing. They’ve been playing with the team for about a year, but played with other clubs and at school for years.

As their brown hair stuck to their foreheads in the heat, they spoke enthusiastically about their mentor-teammates. Because they’d aged out of another soccer club, this team came at a perfect time, they said. But the additional support has been a boon for them.

“When I first came (to the team), I kind of needed help with some of the college stuff,” Parang said. “I was a senior and looking for what to apply to and I didn’t know how to do it.” Damber and Khada helped him navigate that. Now, he plans to attend Michigan State University in the fall and study biochemistry. Mahendra will attend LCC and hopes to transfer after two years to MSU to study mechanical engineering.

“Some of them are working and going to college and they come pick us up and take us back home,” Parang said. “That’s a 20-minute ride. That means they care for us and they want us to interact.”

“And they want us to get better,” interjected Mahendra, smiling.

“And (to) know our people more,” Parang said. For instance, Parang said, speaking Nepali at practice reinforces the language for players who may have resettled in the United States as very young children. This helps the younger players communicate with their parents, who often don’t speak English, Mahendra explained.

“If you need help (with anything), you can just ask one of them and they’ll be there for you,” Parang said.

This is a soccer team at its core, and allowing players to grow their soccer skills is a priority, too.
For instance, when one of the boys from the Bhutanese team wanted to try out for the elite Chill Soccer Club, Damber helped get him there. When the boy made the team, the Bhutanese team covered the costs for him. 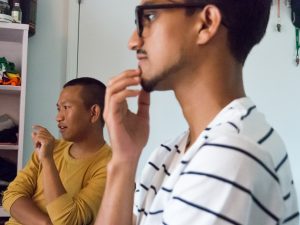 Damber Magar, left, and Khada Chapagai talk about their Bhutanese soccer team, Lansing Youth Football Club, June 20, 2017, at Magar’s home in Lansing. The two help lead a team of fellow refugees and mentor them outside of the sport.

Damber and Khada have hopes for growing the influence of the Bhutanese team. More financial support would allow them to participate in more tournaments and support teammates’ participation in other leagues. Volunteers would allow them to grow in skills on and off the field. More players would position them to register their team with a league like National Premier League.

For now, small fundraisers and local sponsors have helped them cover basics. National Home Care helped purchase jerseys. Registration fees are covered by some of the older players and Bai.

“We’re always working and saving money (for the team),” Khada said. Besides being unofficial mentors, Damber and Khada donate their own time and money, plus spearhead fundraising efforts, too.

To raise community support and awareness of the team, they and the team hosted a soccer tournament in early June at Hope Soccer Complex in Lansing. Drawing 19 teams from all over the United States, the event both wore out Khada and Damber and encouraged them: hundreds showed up to cheer on teams and socialize. Refugee teams from across the country introduced their players to more cultures and people, too, Khada said.

Next month, the team travels to Detroit; in September is a soccer tournament in Wisconsin. The team begins each season “as soon as the weather gets good” in spring, Khada said, and continues until the weather turns colder. Rounding out the Bhutanese team are a young teen from Afghanistan and a player from Mexico. Parang said they pick up just as much Nepali as they need to play.

He said he hopes this team grows — and he intends to stick with them.

“I want to teach them their positions (on the field),” Bai said. “And what they’re capable of.”

The article was written by Erin F. Wasinger, a freelance writer in Lansing and volunteer at St. Vincent Catholic Charities.