You may be familiar with World Refugee Awareness Week, the time every June that the Lansing community and St. Vincent Catholic Charities’ dedicates to advocate for refugees and to celebrate the diversity they bring. The subject of refugees has received much attention over the past six months, leading to an outpouring of support from the local media and surrounding communities.

This past January we had the honor of hosting several elected officials at STVCC. They learned about what we do as mid-Michigan’s only refugee resettlement agency. Tamara Silva, one of our staff members who originally came to the U.S. as a refugee from Cuba, told her story. She planned to travel by boat from Cuba to the United State and like so many  others, she experienced difficulty on her voyage. She was rescued by the U.S. Coast Guard after almost a week on the choppy seas. Tamara recalls seeing “many rafts found alone or with kids on them without parents. I’ll never forget all the sharks swimming around and around the small boats and rafts.”

In response to the tremendous support we’ve received over the past six months and the continuing request for more information on how to help, we’ve created suggestions for ways your faith community can get involved. We call if Refugee Ministries. Examples include providing English classes; helping to furnish a refugee home by adopting a room; and providing higher education counseling. 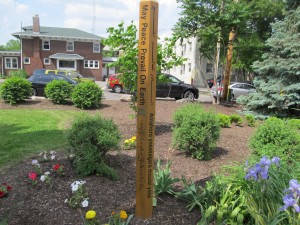 This year we will celebrate World Refugee Awareness Week from June 18 to 24.
It begins with out third annual Welcoming the Stranger 5K Family Fun Run on Saturday, June 18th at Hawk Island Park at 9 a.m. The next day is Refugee Sunday, a day celebrated around the world to recognize refugees. World Refugee Sunday is an opportunity to join churches around the world in praying for refugees. Additional events hosted by area organizations are being planned throughout the week.