Valentine’s Day is all about love and truffles, perfume and hugs, jewelry and kisses, sweet and mushy poems and elegant dinners.  It’s about flowers whose beauty is fleeting, and love that lasts forever.  At St. Vincent Catholic Charities, it’s all about the power of love, tenderness, sweetness, and kindness to transform lives.

Just six weeks before their wedding, the love Carol Prahinski and Flemming Mathiasen shared was tested in a way they had never predicted. 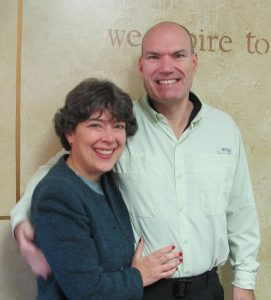 Standing in the American Consulate in Montreal, Quebec, in 2010, they learned Flemming, a Canadian, would not be granted the visa necessary for them to marry. A minor misdemeanor on his record from 18 years before, which had been pardoned by the Canadian legal system, was enough for the U.S. State Department to deny his visa.

The beautiful wedding ceremony at the church where Carol grew up was canceled. Shocked, shattered, angry and emotional, they didn’t know where to turn.

“I have a Ph. D. and we’re both very good researchers,” Carol said. “But we didn’t know why this was happening, or even what we could do about it. There was simply no recourse.”

But the power of love could not be denied.

The Power of Love

Father Joseph Krupp of St. John Church and Student Event Center steered them to St. Vincent Catholic Charities’ Immigration Law Clinic. There, they met Melissa Indish, one of two attorneys who work exclusively in the complex and ever-changing field of immigration law.

“I had no idea this would ever happen to us,” Flemming said. “I’ve always allowed myself to go with the flow, and I never thought God would put us on this path. But I had to have faith, and I wouldn’t have survived without it.” 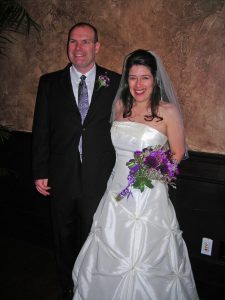 Melissa helped Carol and Flemming navigate the complex immigration system. The couple was able to marry in 2011, first in a legal ceremony at East Lansing’s Irish Pub, then later that year in a ceremony at Carols’ family church, Blessed Sacrament in Chevy Chase, Washington, D.C.

Last year, Flemming became an American citizen and voted for the first time in the presidential election. He volunteered as an elector for the election, and has joined the East Lansing Emerging Leaders program, all ways he plans to give back to his new home.

The Immigration Law Clinic Exists to Serve Others

None of it would have been possible without assistance from St. Vincent Catholic Charities’ Immigration Law Clinic. One in every four clients served by STVCC’s programs receive help from the clinic’s two attorneys. In 2016, they helped 963 clients with a 99% approval rate on closed cases.

The clinic works on a sliding scale fee structure, offering help to anyone who needs it.

“We have the resources so I didn’t mind paying the full fees,” Carol explained, “but for someone who doesn’t, it’s so important to support the work they do.”

At Christmas, Carol and Flemming made a significant donation to the clinic, their way of saying thanks for the assistance on their long journey so they could be together.

For the nearly 1,000 clients who need help navigating the complex legal system of immigration law, St. Vincent Catholic Services will continue to help people like Flemming who simply wanted to marry the love of his life. It also will help the hundreds of refugees who make their home in Lansing as they flee persecution. Like Flemming, many become U.S. citizens and make important contributions to our local economy. 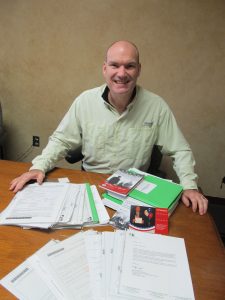 Flemming keeps all of the paperwork he collected along the journey in a strong box. His multiple identification cards from each step of the process are in a plastic sleeve. Sitting atop it all is a colorful invitation to the celebration of his citizenship.

Along with being able to marry the love of his life, he’s proud to call himself an American.