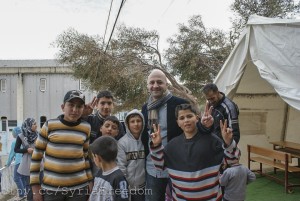 As the world watches the Syrian crisis unfold and as thousands of refugees cross (or attempt to cross) the Mediterranean every month, our hearts reach out to help. According to the latest news from the United Nations High Commissioner for Refugees (UNHCR), over 4 million Syrian refugees have fled their country in search of safety over the past three years. Most are in neighboring countries. Many have endured tremendous hardship fleeing their country and have suffered unbearable loss. STVCC awaits the resettlement of Syrians here in Lansing.

The US has expected approximately 4,000 Syrians to be resettled this year, with larger numbers arriving over the next few years. Considering the extent of the conflict and the overwhelming need, this may seem like a small number. But considering that only less than 1% of refugees worldwide are ever resettled in a third country like the United States, this is normally how it works.

In most refugee crisis situations, it takes time before refugees are moved from a “host country” (the first country of shelter or asylum) to a resettlement country, allowing the United Nations and partner countries to review durable solutions. The first durable solution is always voluntary repatriation. In some cases a conflict will erupt, citizens will flee and then peace will resume allowing citizens to return.

Most people want to return to their homes in safety, being near their family, enjoying their culture. If peace continues to elude the region in question, the second durable solution considered is local integration. In some cases, refugees are able to stay in their country of first asylum, becoming regular residents and in some cases citizens. But many neighboring countries also struggle with border conflicts and are unable to support refugee populations. That is when resettlement in a third country becomes the third and only durable solution.

Meanwhile, we pray for peace, work for justice, and prepare ourselves to serve Syrians when they come.

For more information on Syrian refugees, go to www.unhcr.org and to learn about advocacy for Syrian resettlement, go to www.rcusa.org.