From revolution to a new world. Imagine watching the country you love crumble under the weight of a militaristic communist 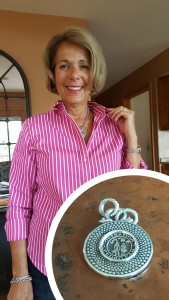 Teresa Araoz and a commemorative badge from Operation Pedro Pan.

regime that fueled a revolution. Picture soldiers ripping your young children from your arms for military service. The Aaroz family and thousands of other Cuban families faced this grim reality in 1960. All this terror resulted from the revolution and take over by Fidel Castro.

Desperate times called for desperate measures. Between 1960 and 1962, Cuban parents placed over 14,000 of their children on planes, gave them student visas, and sent them all over the United States. They entrusted their children to the charity of unknown people. Historians later dubbed this effort Operation Pedro Pan. In the summer of 1961 this flight to freedom included Teresa Araoz (11) and her brother Manuel (12).  Teresa and Manuel left behind their parents, two younger siblings, and their grandmother, with no understanding of when they might see them again.

“We landed first in Miami and were welcomed at a camp that had been set up to house the children traveling alone, where we remained for about a month,” shared Araoz. “This effort to repatriate the children had been established by the Catholic Welfare Bureau in Miami, led by Father Brian Walsh.  They coordinated with Catholic Charities across the country to provide help, support, and opportunities for us and ultimately our families. Many stayed where they landed first and made their life in Miami. Manuel and I ended up in Lansing at what was then called St. Vincent Home for Children.  We were the first to come along with a few others. And then there would be more that arriving over the next two years.”

The churches of Lansing banded together to support the Cuban refugee children. Pastors encouraged parishioners to provide opportunities for the children to visit with families on the weekends or over holidays. Some  families agreed to take in or foster those children whose families could not immediately leave Cuba.  “After staying at St. Vincent’s for about two years, Manuel went to stay with the Fernandez family who had all made it out of Cuba. It was perfect for Manuel because there were older boys in that family.  I was taken in by Dick and Mary Schneider from the St. Thomas Aquinas parish – their children were grown and in college.”

Teresa was a sophomore at Msgr. J. A. Gabriel’s High School by the time her parents were finally able to make their way out of Cuba.  The Araoz family was re-united at last.  “My father attended a special class at Michigan State University to learn English and went on to get a job with the State of Michigan Department of Treasury in their mailroom.  My mother, the matriarch of our family, lived a long life and just passed away this spring.  She never forgot that it was St. Vincent’s that took us in during our time of great need. It made sense for us to direct any memorial gifts in her honor to the organization that made it possible for us to build a new life in Michigan.”

Teresa went on to describe her time at St. Vincent. She saw that more and more elder teenage boys were coming from Cuba. She recalled that in order to provide guidance and support for these boys, St. Vincent hired male college students who were working on advanced degrees in psychology and social work to serve as mentors.

Groundwork for the Future

By the time the Cuban refugees began to arrive, the former mission of the St. Vincent Home for Children as an orphanage was already beginning to transform. Some might say that the Cuban refugees had a historic impact on this now 68 year old organization – laying the ground work for a different and vital mission for the Children’s Home, and also planting the seeds for a robust refugee resettlement service which has provided thousands of families from around the world a safe refuge and the hope for a brighter future.

Teresa Araoz Bossard lives in Ann Arbor. She and her husband have two children, and one grandchild. They often visit Miami to see family and friends, and have had the pleasure of attending Pedro Pan reunions as well as enjoying small gatherings with a group of Cuban friends who shared the St Vincent’s experience and are now living in Miami.  If things change politically, she would like to visit Cuba someday.