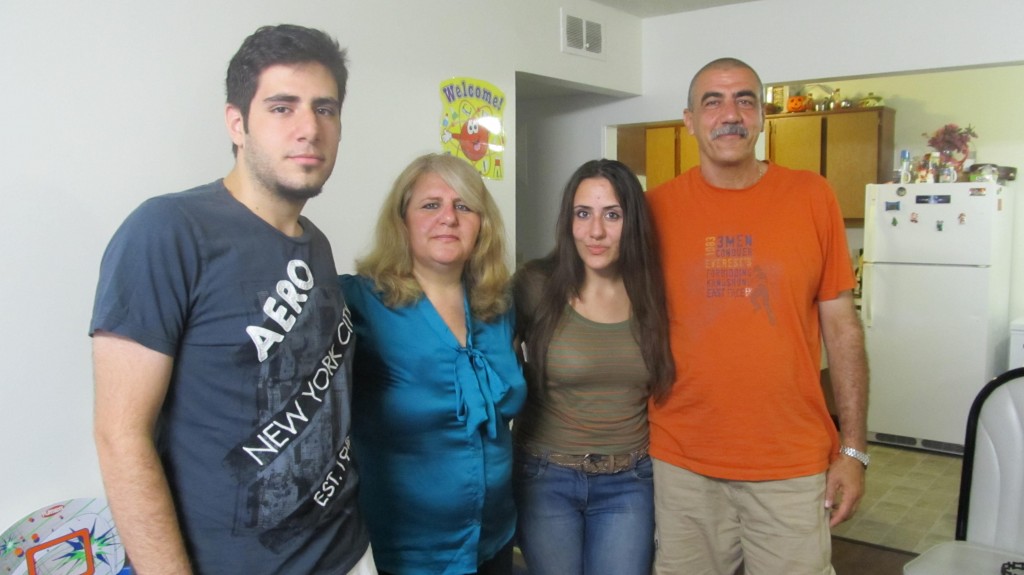 Ghadah and her family were living in Baghdad, Iraq when the war started in 2003. At that time, relations between religious groups in the country were deteriorating. Families who had once lived peacefully as neighbors, now found themselves at war. Groups had begun viciously murdering one another, forcing families to flee from their homes for safety. img_1066

Ghadah was a Christian and a well established teacher in Baghdad. Her husband Khudhur was a successful carpenter, and had begun using his skills to build furniture for the United States Army. The family’s neighbors were growing suspicious of Khudhur’s work and had started making threats. “People would call us on the phone,” remembers Ghadah. “They knew my husband worked with the American army, and they said they wanted to kill him. They wanted to harm him and his family.”

Not long after the phone calls started, people began killing Christians in front of Ghadah’s home. Men were also showing up at Ghadah’s job, threatening to kill her and other teachers. Ghadah and Khudhur decided they could no longer withstand the constant threats. “We were scared” said Ghadah. “We did not know what else to do. My son was 15, my daughter 12. They were young. I had to protect them. We had to leave.”

One morning, the family packed up their belongings and traveled across town to stay with Ghadah’s aunt. For the next five months, they worked to obtain traveling papers that would allow them to leave the country. One day, the threatening phone calls started again. “They started calling my Aunt’s home” recalls Ghadah. “I don’t know how they found us, but they said they were going to come and kill us. So we decided we had to go.”

The family packed up once again, fleeing Iraq and traveling to Turkey. While in Turkey, they started the process of applying for refugee status with the United Nations. “We wanted to come to the United States where we would be safe,” said Ghadah. “We talked with the U.N., and we had lots of interviews. After a year and four months, they finally said we could travel. I was so grateful because it was expensive living in Turkey. We used up all of our money. We had nothing left.”

In 2010, Ghadah and her family were finally resettled to Lansing, Michigan by St. Vincent Catholic Charities (STVCC). “They met us at the airport, and I remember it was so cold” recalls Ghadah. “They gave us coats, took us to our new home. Everyone was so nice.”

St. Vincent Catholic Charities helped Ghadah and Khudhur find jobs, and enroll their children into school. The family was becoming acclimated to life in Lansing, but Ghadah desperately missed her old career as a teacher. After speaking with her STVCC caseworker, Ghadah decided to enroll in St. Vincent Catholic Charities’ Refugee Childcare Microenterprise Program. The program works along with the Michigan Department of Human Services, and the Office of Young Children to train and certify refugee women for free, helping them open privately run day care centers in the Lansing community. “This is a perfect opportunity for me because I love teaching” says Ghadah. “In Iraq, I was a teacher for over 25 years. It is what I love to do.”

Today, Ghadah’s family is thriving. Her son and daughter are both attending a local high school and have made friends in their community. Ghadah’s husband, Khudhur, works in maintenance at a local hotel and is supporting Ghadah’s dream of starting her own business. Ghadah has successfully completed the Childcare Program, and is set to open a daycare center in her home soon. She is optimistic about the future of her business, and has already started making plans to expand. “I want to one day own a large center outside of my home, where I can hire others.” says Ghadah. “In order to do that, I need an American degree. So I am going back to school at Lansing Community College for that. I am all ready! St. Vincent has helped me get to this point. To a job I love. I am so thankful.”