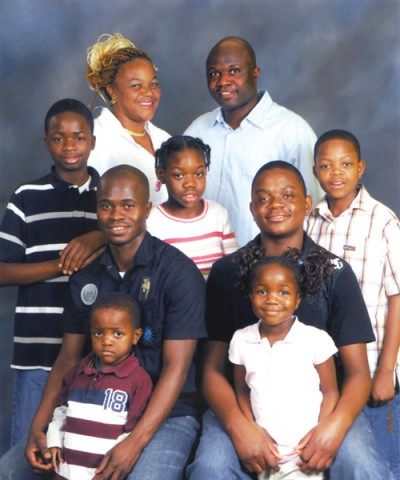 “I just see a big flame.  You know when it’s your house.  I knew it was my home.”  Freddy gestures with his hands to form the shape of a billowing cloud of smoke as he recalls the fearful image of his home on fire in the distance.  It was 2003 in the Republic of Congo.  At that time the country and surrounding areas were facing conflict.  In the smaller towns, militia groups were forming.  The groups consisted mostly of young men who wanted to protect their towns.  However, with fear and manipulation through warfare propaganda, they soon began killing other Congolese who did not share their ethnic heritage.

Freddy was a well known musician and a business owner. Earlier in the year, one of the militia groups visited his restaurant.  They remarked that Freddy allowed Congolese of varying ethnicities into his establishment and warned him to stop.  “They are my neighbors,” recalls Freddy.  “I am not going to tell them they are not welcome.  They are Congolese just like me.”  Freddy explained to the soldiers that all were welcome.  Unsatisfied, they told Freddy he must join them.  Freddy refused.  He recalls that they warned him, “Okay Freddy, we will give you one more chance.  Then, if you say no, we will kill you.”

Freddy stood by his conviction.  As a strong Christian he felt he must sacrifice his own life rather than take the life of another.  The militia group visited Freddy a second time.  Again he refused to ban other ethnicities from his establishment or to join their war.

A couple weeks later Freddy went to church while his wife Aimee visited a neighbor with their three sons, Dolphin, Jonathan, and Kertice.  Their 11 year old daughter Kapinga ventured off to find her Father at church.  Only moments later Aimee witnessed a horrific site.  She watched as militia men firebombed their home.  She knew it was the same men who had threatened Freddy’s life.

As Freddy left the church, he saw flames and smoke consuming the sky near his home.   A neighbor saw him and told him to run.  “But what about my family?” asked Freddy. The man reassured him that they were okay and that the group was after Freddy.  He reiterated, “Run Freddy, run!”  Freddy made his way out of the country and to the nearest refugee camp.  He knew this was the location where his wife and children would come to find him.

After the militia men had cleared the street near Freddy’s home, neighbors took Aimee and her sons to a convent where they hid for months.  Eventually, they snuck across the border to the refugee camp.  Aimee was desperate to find her husband and daughter.  Freddy was overjoyed to hear that his wife and sons had arrived but was shocked to learn Kapinga was not with them.  Their little girl was nowhere to be found.  It was heart wrenching.  “I leave my daughter when she was 11 years old… I don’t know if I can see her again,” Aimee recalls with tears running down her cheeks.  “It is so painful,” Freddy says with deep hurt.

The camp held tens of thousands of refugees and the family was placed in a one room hut with no beds, toilets or running water.  “A refugee camp is the worst place to live.  People are hungry and we have no hospital in the camp.  When children are sick we cannot help them.  So many died,” remembers Freddy.

On one occasion, Freddy and Aimee were asked to come to the refugee intake office.  They had found a young girl about Kapinga’s age.  “I was so excited,” said Aimee.  When they reached the office they discovered it was not Kapinga, it was Aimee’s niece Ulda who suffered from severe physical disabilities.  Ulda’s Mother was Aimee’s sister, who was missing and has never been found.  Freddy and Aimee adopted Ulda as their own.

As a savvy business man, Freddy found ways to barter outside of the camp to get food for his family.  On one of his trips he overheard people talking about a 9 year old Congolese boy named Oliver who had been abandoned and taken as a servant.  Oliver was forced to clean all day, sleep on a wooden floor and was only given a packet of food directly from the freezer at night.  Freddy was furious, “How can one treat a child this way?”  Freddy found Oliver, helped him leave, and legally adopted the young boy into their family.

For 6 years the family lived in complete destitution in the refugee camp.  While there, they had two more children, a daughter named Jemimah and a son named Blessing. Blessing’s name was chosen for a very special reason.  He was born just after the family had been told by the U.S. Government that they were being resettled to Lansing, Michigan.

In the winter of 2009, the family arrived at the Lansing Airport.  Freddy and Aimee knew 14 languages including Swahili, French and Japanese, but they knew very little English.  They had also never seen snow.  It was an overwhelming experience.

St. Vincent Catholic Charities (STVCC) welcomed the family at the airport.  They provided them with coats and took them to their new home.  “We go home, we find food [at the home], a new bed.  Everything was ready,” laughed Aimee.  “It was a warm welcome.  We are very thankful to St. Vincent Catholic Charities.  They know what they are doing.  They are doing a good job.  We are blessed to have you guys here,” agreed Freddy with a smile.

Freddy started working in a local retirement home and Aimee started work at a clothing manufacturing company.  Freddy, Aimee and their children quickly became fluent in English.  Freddy went on to obtain a job as a specialized translator with an elementary school in the Lansing School District.  “I lead the Pledge of Allegiance with them in the morning,” Freddy said with a smile.  “I love my Job.  Children are such a blessing.”

Freddy and Aimee had another surprise soon after arriving.  They delivered a new baby boy, who they named Guerschom.  Today he is 11 months old, the youngest of 9 children, and a joy to the family.  Aimee is taking classes in daycare services and hopes to open her own daycare in the near future.

The children are all thriving.  The oldest son attends college in Texas.  The younger children excel in classes and in sports in the Lansing Schools.  A volunteer they call Coach Pete, gave of his time and talents and helped the boys reach new levels in their sports activities.  Oliver’s ambitions are to be a technician when he is older.  Today, he is a freshman in high school, an artist, a top student and runs track for the varsity team, “My Father blessed me by adopting me when he did not have to, but he knew it was the right thing to do.  Now, I am a part of a loving family.  Now, I can have dreams because I have hope.”  Freddy has made incredible strides in his music since arriving.  He dreamt of the time when he could use his music to speak loudly to the world and share his messages of courage and hope through his music.  He followed his dreams and produced his first CD which was released in March 2012.

Today, Kapinga would be 23 years old.  Sadly, she has never been found.   Freddy and Aimee have never stopped hoping to be reunited with her again.